A special thank you to my cousin and my mom for sharing their memories of my aunt and the scars it leaves on not only the person suffering but their loved ones as well.

In our work with clients, the Operations team and I collaborate with behavioral health and integrated care facilities frequently. We often hear stories of patients who are suffering from mental illness and we witness the challenges compassionate physicians face in trying to care for them and their families.

Such cases tug at my heartstrings and inspire us to go above and beyond to equip providers to care for patients to the best of their abilities.

Yet, when mental illness strikes your own family, those same challenges take on a life of their own. They come closer, dig deeper, and strip you of your ability to look at situations objectively.

During National Mental Health Month, I would like to share with you a personal story – one that my family and I learned a great deal from; one that illustrates the gravity of what can happen to a family when mental health is not prioritized and mental illness is not taken seriously.

The Ripple Effects of Mental Illness

My aunt had schizophrenia. Though she passed away last fall at the age of 82, her pain still lingers within my family like a damp fog.

“My big sister was always really good to me,” my mother told me. “When I was little, Mary spoiled me.” While my mother remembers the days when Aunt Mary was mild mannered and known for being book smart, generous, outgoing, and kind, other members of my family tell a bleak story that starts shortly after Aunt Mary got married and began having children.

Aunt Mary had a daughter, Linda. From the age of 6 years old, Linda was forced to grow up faster than any 6-year-old should. She cleaned the house, cooked for her parents, and did chores from morning until evening – not because her parents were strict, but because Aunt Mary’s mental illness incapacitated her.

My cousin Linda once confided in my mom that she did all of the housework, the cooking, and the cleaning to keep the family functioning – a heavy burden for a young girl barely old enough to ride a bike.

After my mother left home, she only saw my aunt a few times per year for family events and holidays. With each visit, Aunt Mary’s condition seemed more grave. 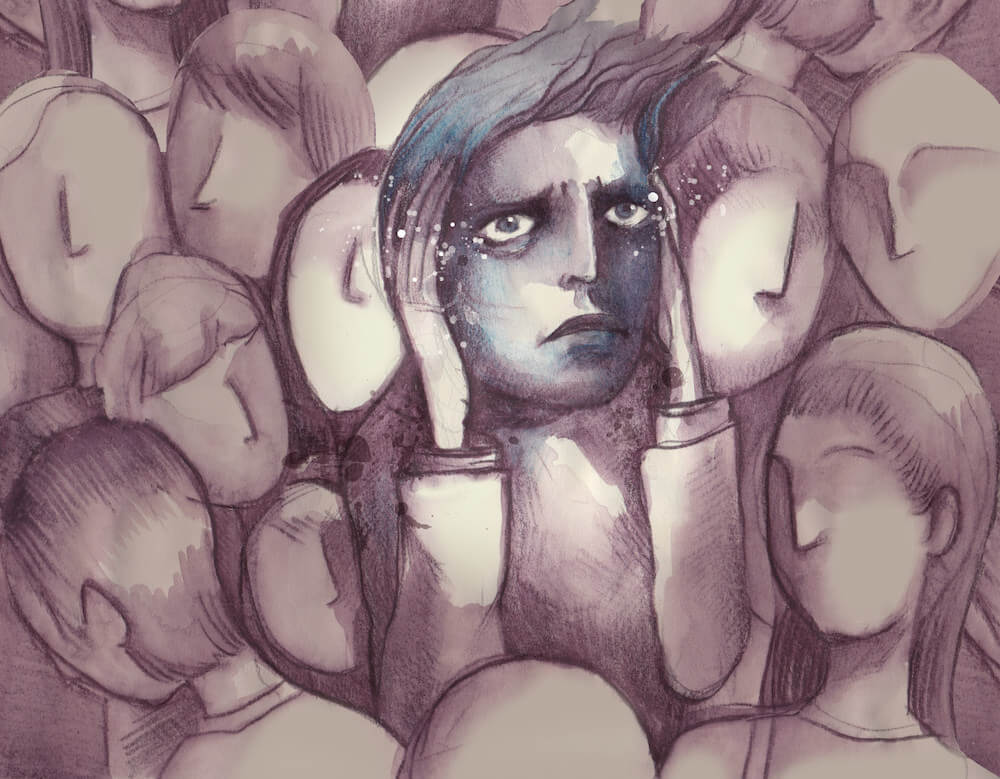 By the time I came to know Aunt Mary, she was in her late thirties. By then, her condition had worsened to the point where we all learned to “walk on egg shells” around her and watched what we said about her symptoms to Aunt Mary’s husband. Uncle Richard was the epitome of denial – perhaps due to the pain of seeing his wife transform into an unrecognizable form of herself, but more likely due to his discomfort with mental illness.

Aunt Mary was extremely sensitive, had a short temper, always believed she was “not good enough,” struggled with weight issues (the worst of which was the self-criticism that came with not being happy in her own skin), and was prone to extreme overreactions to the slightest irritant.

One day, my cousin Linda and my older sister were driving down the road. Due to some obstruction, they slowed down, veered off the road, and slid gently into a ditch. No one was hurt and the car had barely a scratch. Yet, when Linda called Aunt Mary to let her know, Aunt Mary lost it.

She screamed, she cried, she lashed out at the air wildly. She was completely distraught, and no one could calm her.

On other occasions, she accused my uncle of having an affair with my other aunt (her sister) or would frequently say that my uncle had a red head in his truck waiting for him in the barn.

My uncle has also found her with a shotgun to her head more than once and was finally committed for 30 days, but after she was released, nothing came of it.

Aunt Mary accused family members of lying, deceiving her, and worse. She couldn’t stand loud noises and freaked out around my younger cousins. No one – no matter how logically we argued – could convince her of reality.

In time, we learned the path of least resistance and tip-toed around Aunt Mary’s fragile nature.

In other words, we did nothing.

When Mary’s symptoms first started, she and her husband were living in a time and community that did not talk about mental illness. It was the ’60s and my uncle was raised in a rural farming community where kids were taught to be tough, resilient, and silent.

Decades later, my uncle still could not bring himself to address the beast that had taken over their household, their relationship, and our family dynamic – the beast of mental illness.

Left unattended, the beast was allowed to fester and grow. Poor Aunt Mary had nowhere to turn for help, even if she had the wherewithal to recognize the need.

While Aunt Mary’s default reaction was to overreact, at other times she seemed to see dangerous behaviors as commonplace. She was once found parked on a freeway just beyond a hill, with her driver-side door open and her feet hanging over the pavement. Another driver came over the crest and crashed into the back of Aunt Mary’s car. Then another.

One fall, my parents went to visit Aunt Mary for dinner at her mobile home. “All the windows were covered with foil,” Mom told me. “The TV glass was covered with a towel. The mirrors were covered. Anything that could be perceived as a way for others to look in on her was covered or hidden or destroyed.”

When Aunt Mary kept referring to “them” and “those people,” my mom knew it was time to do something.

Sadly, it took decades of suffering before someone in our family had the courage to shine a spotlight on the problem and get Aunt Mary the help she needed.

Aunt Mary spent the last 16 years of her life in a nursing home after suffering a stroke. The vast majority of her life was spent in fear and panic behind an invisible, impenetrable wall.

“The more you look back, the more evidence you see,” my mother told me, reflecting on Aunt Mary’s behavior. “It’s hard to see in the moment, but you just need to start talking about it. There are so many resources available today, almost anyone can be helped. We just need to talk about it.”

Finally, in 2019, the stigma surrounding mental illness is beginning to melt away. However, for those living with mental illness and their family members, the pain and shame are not easily sloughed off.

Mental illness affects the quality of life of everyone who is connected to the person suffering. Therefore, we as a community have a responsibility to watch out for the signs and, most importantly, act with compassion, positivity, and understanding to get someone the help they need.

While we honor National Mental Health Month in May, resources are available year-round.

If you know someone who is struggling with mental illness or if you have questions about mental health, contact the National Alliance on Mental Illness Hotline at 1-800-950-NAMI (6264) or email NAMI at info@nami.org.